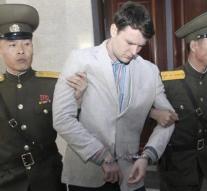 amsterdam - The 22-year-old American student Otto Warmbier, arrested in North Korea, was released for humanitarian reasons this week. According to his father, the student had 'severe brain injury caused by torture.' He was in coma and was nursed in Cincinnati city.

The family reported Monday that the boy succumbed to brain injury that Otto encountered during his detention in North Korea. His father said immediately after the release on June 13 that his son was seriously abused by the North Koreans. He suffered from brain injury by torture, he said. Pyongyang said that Warmbier suffered from botulism and had released the student for humanitarian reasons.

US President Donald Trump has condoned the family. He believes that the Warmbier family faces difficult conditions. He spoke of a 'brutal regime' in North Korea that has no respect for 'human decency'.

The student from Virginia was arrested in February 2016 because he tried to steal a propaganda flag with the name of former leader Kim Jong-il. He was sentenced to fifteen years of forced labor.

The travel organization with which the student traveled to North Korea did not let travel for Americans travel to the country.