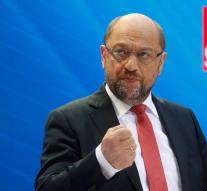 berlin - After the election defeat of the Social Democratic SPD in the German elections, party leader Martin Schulz wants to get the broom out of the party and partly adjust the course of the party.

He suggested that the retiring Labor Minister Andrea Nahles appoint as a group chairman. Schulz himself will be in the coming months to speak to the party divisions in order to reach a new course. He would like to stay as party leader. This will be decided at the SPD conference in December.

Inside the party there is disagreement between the left wing and the leadership. The critics believe that the party has gone too much in government reforms, so many voters would have switched to the right-populated Alternative für Deutschland (AfD).

Schulz said after the announcement that the SPD would not again be in a major coalition with the Chancellor Angela Merkel's CDU / CSU. Merkel has nevertheless invited the SPD to take part in the format table.

With 20.5 percent of the votes, the SPD scored the worst election result since 1949.