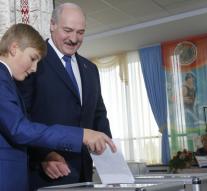 - The Organization for Security and Co-operation in Europe (OSCE) finds that the presidential elections in Belarus were not held in accordance with the applicable principles of democracy. Incumbent President Alexander Lukashenko won Sunday as expected by force majeure. He received more than 83 percent of voters behind him and could begin his fifth term.

"It is clear that Belarus still has a long way to go towards the fulfillment of its democratic commitments", said Kent Hasted, who acted on behalf of the OSCE as election observer.

The recent release of some political prisoners before the elections was a welcome and positive development, says the organization. But the hopes it raised for electoral progress, has remained unfulfilled.