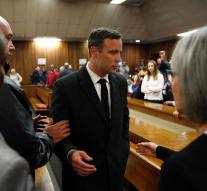 - Oscar Pistorius is Saturday with injuries taken to hospital from prison. That South African media reported Sunday. The South African athlete's in jail because of the shooting of his girlfriend Reeva Steenkamp in 2013.

According to reports, a prison spokesman said Pistorius was injured on his wrists because he had fallen out of bed. But according to fellow detainees, the 'blade runner' injured himself deliberately.

The judge sentenced the former Paralympic and Olympic athlete in July to six years in prison.