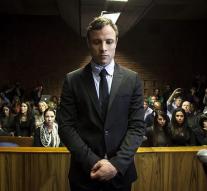 johannesburg - Former athlete Oscar Pistorius was transferred from his cell to the hospital on Thursday. According to South African media, he complained about chest pain.

Prison workers would have been afraid that South Africa would have a heart attack. Pistorius (30) will spend the night for observation in the hospital.

The former paralympic and Olympic athlete, also known as the 'Blade Runner', is jailed for the death of his girlfriend Reeva Steenkamp in 2013. He was sentenced to six years in July last year.

Last year August, Pistorius also entered the hospital. He had injured his wrists but said he had done a suicide attempt.