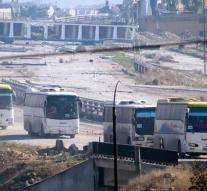 geneva - The minors detained in an orphanage in eastern Aleppo have been brought to safety. This was announced by the UN organization UNICEF on Monday. ' This morning, all 47 children evacuated from the institution. Some are in bad shape by injuries and dehydration, '' said regional director Geert Cappelaere.

UNICEF and other aid agencies put the last few days make every effort to reunite minors who already were previously removed from the besieged Syrian town with relatives. In addition, medical care was provided and distributed winter clothing.