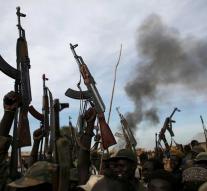 juba - An orphanage with about 250 children in southern Sudan has been isolated because it has come to the center of the battle scene. On the one side of the building, the government leader involved statements while on the other hand warriors of the opposition had dug themselves.

According to the United Nations, no-one's orphan's home is out of or in and are also stopped by caregivers. The UN mission in the country calls the situation unacceptable. The orphanage is located just outside the village of Torit, about 120 kilometers southeast of the capital Juba.

South Sudan has raged a civil war since the end of 2013, which has already cost tens of thousands of people the lives of nearly 3.9 million people.