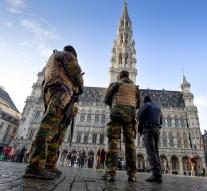 According to the French-speaking Belgian media eight soldiers and two policewomen would have held a sex party at the police station. That happened at the height of the terrorist threat in Belgium. Soldiers patrolled in Brussels, used the police station at that time as a kind of makeshift barracks.

Police spokesman Johan Berckmans is surprised by the news, as he told the Flemish newspaper De Standaard: There is nothing heard about until we read it in the newspaper today. We can only confirm that there is indeed a 15 to 20 soldiers sleep in Ganshoren in that period. But if something happened there, we do not know. Internal Oversight Services has launched an investigation.