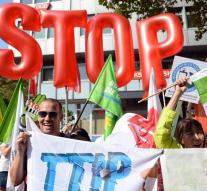 - "The promoters of demonstrations in Germany against the European free trade agreements with Canada (CETA) and the US (TTIP) count on hundreds of thousands of participants. In seven German cities are scheduled Saturday demonstrations."

"Roland Süss of the anti-globalization movement Attac Deutschland hoped Wednesday totaling a quarter of a million demonstrators in Berlin, Frankfurt, Hamburg, Cologne, Leipzig, Munich and Stuttgart. About a third of the demonstrators are expected in the capital."

"The Lower House bowed Wednesday in The Hague on the impact of the CETA. The EU's negotiations with the US on the TTIP meanwhile seem to hang."