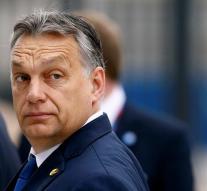 ankara - Hungarian Prime Minister Viktor Orbán criticized critically about 'Turkey-hostile statements by major EU countries' on Friday. His country will not participate there, he said, visiting Ankara, even if that has unpleasant consequences.

Orbán is in Turkey to pick up the tires. He has taken his half-government and about seventy businessmen. Both President Erdogan and Prime Minister Yildirim received the Hungarian Prime Minister.

The friendly duties between Erdogan and Orbán contrast strongly with the diplomatic arguments that Turkey has recently had with other EU countries. Between the Netherlands and Turkey, the relationship was seriously affected by the fact that the Netherlands was a Turkish minister because they wanted to hold a speech in Rotterdam on an explicit ban.

The German government announced Thursday that Erdogan will not be allowed a speech to Turkish Germans next month when he visits the G20 summit in Hamburg.