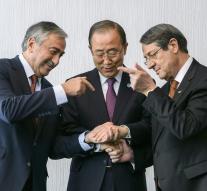 montreux - Talks to reunite the divided island of Cyprus to be launched Monday near the Swiss town of Montreux. UN chief Ban Ki-moon said at the start that peace is within reach, as much progress has been made in the preceding year and a half. However, there are according to Ban Ki-moon 'some sensitive and difficult questions unanswered.'

Political unrest in Cyprus and by Athens-backed coup in Nicosia, led in 1974 to a Turkish invasion. Turkey occupied since the north of the island. An estimated one fifth of the total of over one million inhabitants are ethnic Turks living in the occupied northern part. Cyprus joined the European Union in 2004. The Turkish occupation of northern Cyprus is a major sticking point in relations between the EU and Turkey.

A close associate of the UN chief, the Norwegian Espen Barth Eide, the peace talks leading to last five days. The president of Cyprus, Nikos Anastasiades, and the leader of the Turkish Cypriots, Mustafa Akinci, were silent at the start of this round of talks. Both are considered moderate.