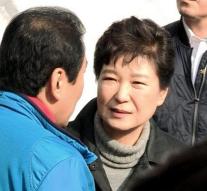 seoul - Opposition parties in South Korea announced Friday that they December 9, will hold a vote on the deposition of President Park Geun-hye. The Party of Park itself has not yet decided whether they want to vote her off.

Park himself has offered to resign. She has asked parliament Tuesday to decide how and when they should resign following the scandal surrounding her adviser allegedly abused the relationship in order to extort money from businesses. The opposition parties, however, rejected the offer because they see it as an attempt by Park to gain time and avoid deposition.

The three opposition parties together have 165 of the 300 seats in parliament, but need the support of Parks saenuri party to get the required two-thirds majority.