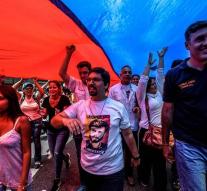 caracas - The opposition in Venezuela has called on the people Monday to silence the work later this week 24 hours. The national strike, which must take place on Thursday, is aimed at the left-wing government of President Nicolás Maduro.

The interruption of work is part of a number of protests against Maduro. The opposition also demands that the judges of the Supreme Court be replaced. 'This is the decisive moment,' said Freddy Guevara on behalf of Maduro's opponents.

On Sunday, almost a third of the electorate voted in the symbolic referendum against the Socialist government. '7.18 million people confirmed Maduro's horrors,' said Parliament president and opposition leader Julio Borges on Twitter.

In total, 19 million Venezuelans were called upon to vote in the referendum. The popular vote against the reform of the constitution was organized by the opposition. The government does not recognize the parliamentary consultation.