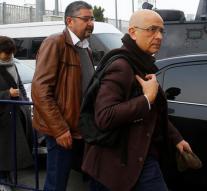 ankara - A Turkish court has found a parliamentarian of opposition party CHP to be guilty of espionage on Wednesday. The judge sentenced Enis Berberoglu to 25 years in prison. The CHP talks about an attempt to intimidate critics of the ruling AK party.

It is known to be the first time a CHP parliamentary cell punishment is received. Berberoglu would have played video footage to the media. It was reportedly revealed how the Turkish secret service brought weapons to Syria with a truck.

The CHP, Turkey's biggest opposition party, reacted indignantly to the ruling. 'The confinement of our parliamentarian is a terrible example that shows that the judiciary is fully in power by the executive body,' said vice-president Engin Altay against reporters.