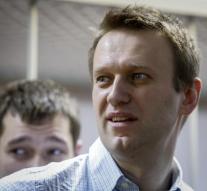 moscow - Russian opposition leader Alexei Navalni has been reported as a presidential candidate for the elections of 2018. He began his campaign Tuesday with the announcement that he had 'a fair and modern Russia' pursues and will tackle corruption. 'Support my candidacy if you're agree that Russia needs real elections,' said the forty politician and activist.

Navalni is one of the main critics of current President Vladimir Putin. He organized mass protests against corruption and nepotism in the Kremlin.

In 2013 Navalni ran for the mayoralty of Moscow. He lost the elections Sergei Sobianin, which had the support of Putin, but was surprisingly more than a quarter of the votes. His camp claimed that had been tampered with and the results he had obtained more votes in reality.