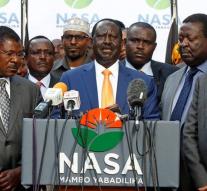 nairobi - Opposition leader Raila Odinga retires from the presidential election in Kenya, which is being held again this month. Odinga repeatedly said he would boycott the poll if the electoral council did not replace the officials who accused him of irregularities in August.

At a press conference in the capital city of Nairobi, the opposition leader told Tuesday to act in the interests of the Kenyan people, the region and the world in general. The new election is on October 26th.

The Kenyan High Court ruled last month that the poll should be reversed due to irregularities in the electoral commission. The judges declared void victory of Sitting President Uhuru Kenyatta.