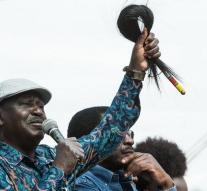 nairobi - Kenyan opposition leader Raila Odinga has called for a strike on Monday to support his claim on the presidency. He accuses the ruling party of 'wasting the blood of innocent people' despite increasing pressure on him to recognize the election defeat.

The electoral commission declared Friday's sitting ruler Uhuru Kenyatta to be the winner of the presidential election with a difference of 1.4 million votes. International observers said the election was largely fair, but Odinga disputes the results and claims that it has been fraudulent. He has not provided any evidence.

'Jubilee has wasted blood from innocent people. Tomorrow there is no work, 'said Odinga on Sunday for a crowd of 4000 cheering supporters, referring to the ruling party. He promised to come up with a new strategy on Tuesday.