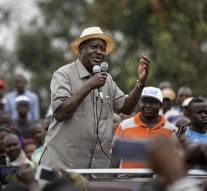 nairobi - Kenyan opposition leader Raila Odinga is threatening to boycott the resignation of the presidential election. He demands 'legal and constitutional' guarantees to ensure that the ballot box is honest.

'You can not make a mistake twice and then expect another outcome,' said Odinga to reporters. He demands, among other things, the resignation of a number of staff members from the electoral commission. He would also rather see that the forthcoming election is held on another day.

The Kenyan High Court ruled last week that the poll should be reversed due to irregularities in the electoral commission. The judges declared void victory of Sitting President Uhuru Kenyatta. The new election is scheduled for October 17th.