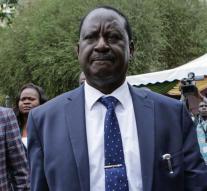 nairobi - The Kenyan opposition and the government party of President Uhuru Kenyatta get partial access to electoral computer systems in the East African country. They can find out, among other things, who used the devices and servers of the independent authority, judging the Supreme Court.

The electoral council called President Kenyatta earlier this month to the winner of the presidential election. He would have received 1.4 million votes more than his main challenger, opposition leader Raila Odinga. International observers also said that the election was largely fair.

According to the opposition, that is not the case and the results are blurred. Odinga suggested that the look systems were 'hacked' by people who used the identity of Chris Msando; The ICT chief of the electoral committee, which was found dead shortly before the polling session. He was tortured according to the authorities.

Odinga has gone to the Supreme Court to fight the victory of his political rival. The court must decide within a few days whether the polling must be overridden.