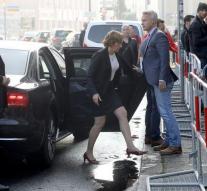 berlin - A group of opponents of the Alternative für Deutschland (AfD) has been drawn to the victory party of that right-populist party. It is estimated that around 100 people gathered for the building at Berlin Alexanderplatz where the AFD fans celebrate their election success.

The police already have a large team on site. Lights against the AfD are scanned on the square.

According to exitpolls, the AFD becomes Germany's third party. The party is expected to reach more than 13 percent of the votes, which is more than previous polls (11 percent). The party was founded in 2013 by Eurosceptics who mainly turned against the euro and the economic policies of Berlin and Brussels. The party has since been moved to populist right after a series of internal arrays, and is mainly against immigration.