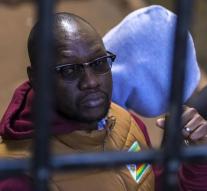 harare - A prominent opponent of Zimbabwean President Robert Mugabe (93) is waiting for a jail sentence of possibly twenty years. Predikant Evan Mawarire had to answer to court on Monday for accusing Mugabe of falling.

Mawarire's lawyer argued at the beginning of the trial that his client with the alleged video messages only used his right to free speech. The films that the accused made last year went to Zimbabwe as a running fire.

Mawarire, who was still awaiting the lawsuit, was arrested on Sunday after calling in a new video to protest against the elderly president. For that crime he must appear on Tuesday.

The well-known Mawariri does not belong to a political party but, due to the social media in 2016, grew to the head of the opposition in the South African country.