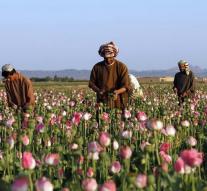 kabul - The production of opium in Afghanistan has increased considerably this year. According to a report by the UN agency for drugs and crime (UNODC). This year is expected to be 4,800 tonnes of opium, at 3,300 tonnes last year.

Actual production could even be even higher, as observers UNODC could not monitor everywhere. Especially in the provinces where much opium is produced, it was often too dangerous.

Opium, which is extracted from poppy, is a raw material for heroin. The money earned with it, often goes to terrorist organizations. The proceeds would the Taliban alone in 2015 about $ 500 million are (459 million euros).

Particularly increased production in the north, with a whopping 324 percent. But most of the opium produced in the southern region of Helmand where the Taliban are most active.

The total area where poppy is grown, is estimated to have increased by 10 percent and now covers 201 000 hectares.