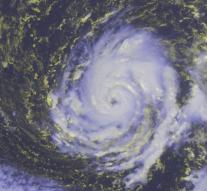 miami - Tropical storm Ophelia has grown so far in Wednesday that there is officially the tenth hurricane of the 2017 season on the Atlantic Ocean. That has announced the National Hurricane Center in Miami. Ophelia is now about 1200 kilometers southwest of the Azores with wind speeds of 120 kilometers per hour.

According to the NHC, further awakening in the next 48 hours is possible. Ophelia, however, does not move to the US but goes towards Europe. According to the current expectation, after the weekend, Ireland can get the full low, even if it is likely that there is a tropical storm again.