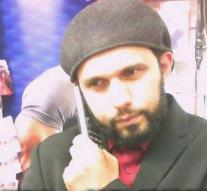 glasgow - The manager of a supermarket in the Scottish Glasgow was killed Thursday, just hours after he had put an Easter message for his Christian customers his facebook page. The police have arrested a suspect and says to treat the case as a 'religiously motivated' murder.

The 40-year-old Asad Shah was according to neighbors who
The Daily Telegraph spoke, known as a lovely man. 'He did not hurt a fly,' said a neighbor. And a neighbor tells how Shah and shake hands each day and wished each other a good day, 'He was such a kind, sweet man. '