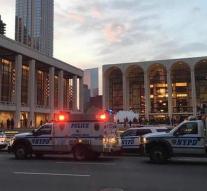 - A performance of Rossini's opera William Tell in New York on Saturday night (local time) called off after a visitor white powder sprinkled into the orchestra pit. The presentation afterward, The Italian in Algiers by Rossini, was canceled because of the incident. According to police, it probably involves ashes of a cremated person. A witness would have heard tell a man that he came to the opera to scatter the ashes of his friend and mentor.

A visitor to the New York Metropolitan Opera says that the break it took a very long time. It was informed that there was a technical failure and a moment later said that the show would not go on and that the public had to go home. It was ' boo 'called, but everyone left quietly hall.

' But it was said that there was a technical fault, while five meters with a possibly lethal powder was sprinkled, does it make me shudder, 'said one visitor.

To which powder it really is and who threw in the pit is not yet clear. Police are still looking for the culprit.

According to the newspaper The Telegraph was the opera on Tell after more than eighty years back on the program of the New York Metropolitan Opera.

The renowned opera house has seen more strange incidents. In 1988, there was someone from the balcony and died during the intermission of a performance of Macbeth.