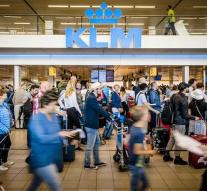 amsterdam - Travelers to the United States may no longer include devices that have been openly visible in the hand luggage. These are electronics, for example, the screws are missing or whose housing is damaged. That confirms KLM and Schiphol versus Tweakers.

All devices larger than a smartphone, such as tablets, e-readers, cameras and laptops, fall under the rule. The shielded security entered last week, without being communicated to travelers. Some were only arrested while they were almost in the plane.

'It is a security measure and we can not say much about it,' says a KLM spokesperson.