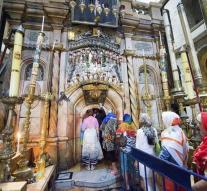 jerusalem - Scientists and restaurateurs have opened the tomb which is believed that the body of Jesus was laid down after the crucifixion. The Holy Sepulchre is in the namesake church in the old walled city of Jerusalem.

The tomb and the marble slab that covers, updating, an operation which fetches nearly 4 million. It is an excellent opportunity for scientists to study the holiest Christian monument.

The tomb is restored by Greek specialists from the Technical University in Athens. They investigate include the stone which would be deposited the body of Jesus. The Greeks also worked on the restoration of the Acropolis in Athens and the former cathedral Hagia Sophia in Istanbul.

A total of fifty experts look into the tomb. They work mainly at night to give pilgrims daytime opportunity to visit the Holy Sepulchre. The place has been rebuilt four times, the last time after a fire in 1810.