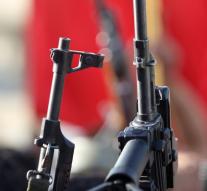 - In the struggle between different groups of jihadists in Syria was deployed in August mustard gas. This enables the Hague-based International Organization for the Prohibition of Chemical Weapons (OPCW).

According to the OPCW is the gas in the village of Mary north of Aleppo on August 21 used during fights between jihadi Islamic State (IS) and other extremist armed group. There is probably dead by fallen, according to a report by the end of October OPCW Thursday that a summary is published.

Mustard gas is an internationally banned chemical weapons and causing burns of eyes, skin and lungs.