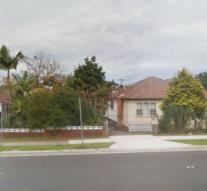 sydney - An Australian businessman wanted to cry when he arrived home this week. His home in Sydney with pale razed by construction workers who were mistaken.

A friend of Steve Ballas saw what was happening and called him immediately: 'They're wrecking your home. 'At home, he saw that it was not a joke and to prevent an escalating feud he called the police, he told the BBC.

The officers checked the workers and their papers and soon found out what had happened. There was an order to demolish the building on Marion Street number 200. Ballas also lives at number 198, but in his mailbox is 200.

Ballas himself also thought that the house, which he held for several years, at number 200. He planned to rent the house, so it was empty. 'There just people could have been at home,' he told the BBC.

The municipality is investigating the blunder. Ballas has already had a meeting with the owner of the demolition company, which reports according to him the news. 'It was an understandable mistake,' Ballas perspective. 'Poor man, he was speechless. '\n  \n  \n   advertisement