Home / World / Only after G7, Trump decided on climate agreement 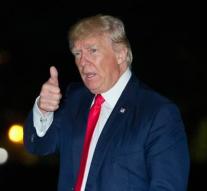 washington - US President Donald Trump makes a decision on whether or not to terminate the climate agreement of Paris until after the G7 at the end of May in Italy. Spokesman Sean Spicer of the White House said Tuesday that Trump from his advisers would like more information about the pros and cons of American involvement in the climate treaty.

Previously, Trump had promised to cut the knot before the seven largest industrial countries (G7) meet in Italy in late May. Top advisers from Trump and Cabinet members would discuss in the White House on Tuesday whether the president should keep his campaign promise. That meeting has been postponed.

According to sources in Washington, Trumps, daughter of Ivanka and Foreign Minister Rex Tillerson, would argue that the US remains involved in the climate agreement. Top advisor Steve Bannon would urge Trump to terminate the international treaty.

In the run-up to the election, Trump said that he wanted to quit US participation in the climate treaty. Foreign leaders have called him not to do anything.