Home / World / On bail to Curacao 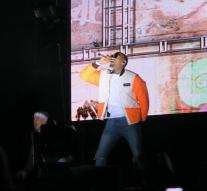 - It was three days, the most asked question on the island: he or does not he come? At midnight he would enter the stage. On the field chanting especially young girls just as its name. 'Come on, Chris. Come on, Chris. ' And then the lights and start the introduction video. The sign for Chris Brown to make his appearance on the Curacao North Sea Jazz Festival.

Fifteen minutes before Charlotte still nervously looking at her watch. She came specially for Chris Brown. 'Do not worry. On the radio they said he's been on the island, 'says her father assured her. A little further Manou stands with her mother. 'It's really exciting fat. And so special that Chris Brown just come here occur. I like his music, fun, and he can dance so well, 'exudes the teenager.

The tension among fans and organization will start a few days earlier, when the American singer is in a very different situation. The police surround his home in Los Angeles after a report that his company would be threatened with a firearm. An arrest follows. After an imprisonment of ten hours pay Brown 250 000 dollars to be released on bail.


And now he stands on the parking of WTC Curacao has been transformed into a festival site. The 27-year-old Brown makes a show of it. Every dance move guarantees screams from young girls. For many older visitors, this is the sign to leave.

For most was the highlight of the seventh edition of North Sea Jazz in Curacao earlier in the evening occurred when Sir Tom Jones (76) surprised with a tribute to Prince. Therefore, the energetic entertainer had the audience entertained for more than an hour with all his classics, including It's Not Unusual, Delilah and Sex bomb. Sweat poured from his body, halfway through the performance, his shirt already soaked. The public swings at 28 degrees on end. Only when the number Tomorrow night is silent. 'This is what I always sang for my wife. And therefore especially for you tonight, 'the Welshman told whose wife, with whom he had 59 years together, Apr. died this year.

For most artists, this is the first time in Curacao. Jamie Cullum, Betty Wright, Tom Jones. They are all impressed. Romeo Tom Jones knows how to hit the right chord with the audience: 'It's awesome. I'll definitely return. '