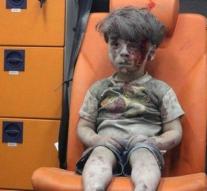 aleppo - A heartbreaking picture of a 5-year-old Syrian boy who was rescued from the rubble after a bombing in the violence-plagued city of Aleppo, the world is about. Omran Daqneesh tail defeated and dazed in front of him as he sits on a chair in an ambulance.

The boy fell Wednesday supposedly injured in an attack by the Russian Air Force or the Syrian government army, the British newspaper The Telegraph reports. The small Omran has been discharged from the hospital, where he was treated for his injuries.

The images of the young victims shared thousands of times on social media. Many people are shocked and express their disgust. 'When will intervene?' Someone asks himself. 'How do we explain Omran this out?' Another: 'I just want to hug him. '


Aleppo is all times the bloody scene of fighting between Syrian rebels and the government. The violence has increased dramatically in recent months. For the lives of the 1.5 million inhabitants is more feared by the day.