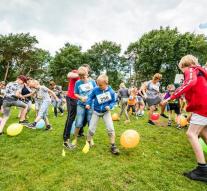 - The 15-year-old Rik from Rijnsburg (Zuid-Holland) has kept a good story about his summer holiday. He won the biggest game of ballooning in the world on Wednesday. At a holiday park in Ommen (Overijssel) the teenager defeated 503 others. All participants eventually won a bit, because they took a place in the Guinness Book of World Records.

At the Beerze Bulten holiday park, 504 enthusiasts knocked a balloon on their leg for a big pot of ballooning. This to surpass the old world record (with 396 participants). That was successful.

Rik van Egmond from Rijnsburg was the only one who failed to break his balloon by other participants. He addressed a diverse group of children and adults, including an 85-year-old lady.

Notary Post from Ommen was present with two observers to officially count the number of participants. In addition, the record attempt has been recorded on cameras.