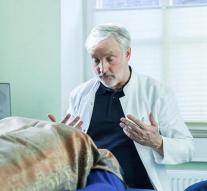 krefeld - Many more patients than has been believed to be deceased after treatment in the clinic of the German naturopath Klaus Ross. According to the German broadcaster WDR, the police are investigating now seventy deaths. The crucial question is: they are deceased from cancer, or death is due to the administration of the disputed preparation 3-Bromopyruvat (3-BP)?

Ross's clinic is spent in the village, just across the border between Roermond and Venlo. Justice suspects alternative healer of wrongful death and / or serious assault in three cases. Two of the dead were Dutch. The clinic treated many people who were abandoned by mainstream doctors. It is therefore how the high number of deaths should be interpreted.

According to the WDR will possibly be necessary to exhume bodies of deceased patients for the study. Justice in Krefeld, however, said nothing about it. German broadcaster relies on its own research.