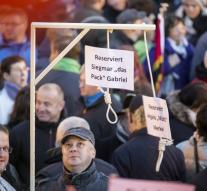 dresden - Justice in the German city of Dresden is investigating whether supporters of anti-Islam movement Pegida have acted punishable by entraining gallows during a demonstration. According to the accompanying texts execution tools were intended for German Chancellor Angela Merkel and her deputy Sigmar Gabriel.

The Public Prosecutor (OM) sees in this way demonstrate a potential disruption of public order and an "open invitation to commit crimes". Justice has no suspects in the picture and also do not know who built the gallows yet.