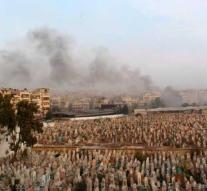 rotterdam - The Public Prosecution Service suspects a wholesaler of chemicals in Rotterdam from illegally exporting acetone to Syria. That confirms the OM. Acetone can be used as raw material in the production of chemical weapons.

Customs and FIOD have already searched the wholesaler in Rotterdam on 18 April. On the basis of information from Belgium, the suspicion had arisen that the Dutch company had exported 200,000 liters of acetone to Syria without a license. That happened via Russia.

The Public Prosecution Service had already designated the company as a suspect in a criminal investigation. In November 2016, the wholesaler sold 38. 400 liters of acetone and exported it to a person in Syria via the port of Antwerp. The Public Prosecutor did not announce the name of the company.