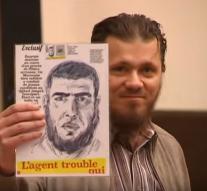 - "The Public Prosecutor of Belgium on Thursday demanded fifteen years in prison against the Muslim preacher Jean-Louis Denis. This was previously convicted to ten years in prison for terrorism, but the Public Prosecutor appealed against that penalty appeal. Also fought the OM the acquittal of the wife of Denis and demanded the eight-year sentence against her. They would have helped her husband actively calling for jihad."

"The prosecutor continued to show its strength in demand by film footage showing that Denis had prompted young people to join the jihad. They also appointed his ties with Sharia4Belgium and Syriëstrijders."