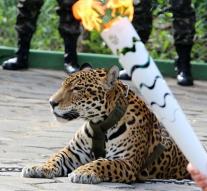 manaus - A jaguar was shot dead shortly after the animal had figured in a ceremony with the Olympic flame in the Brazilian city of Manaus.

The animal escaped after the shoot to her guardians, attacked a soldier, let know the Brazilian army. Four anesthetic darts could not stop the female jaguar Juma, after a soldier shot her to death with a gun.

The organization of the Games has announced that it has been an error of judgment to keep the Olympic torch relay on its journey through the land next to a wild animal.


Animal activists condemn the killing of jaguars and wonder why the animal was at all used in the ceremony. 'When do we learn? Wild animals are trapped and must do things that are frightening, sometimes painful and always unnatural to them, are ticking time bombs, 'said one activist group PETA in a statement.


Juma lived from childhood already in the zoo along with six siblings.