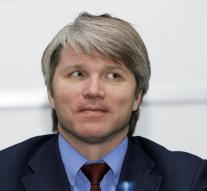 moscow - Russian President Vladimir Putin Vitaly Mutko Wednesday dismissed from his post as Minister of Sport. Pavel Kolobkov, one of the best epee fencers ever, his successor. The Olympic champion from Sydney 2000 was Secretary of State.

Moetko remains actively involved in the government of Dmitry Medvedev as deputy prime minister who will oversee the youth, tourism and sport. He lay as sports minister under fire for a huge doping scandal that nearly led to a complete ban of Russian athletes at the Olympic Games in Rio. The head of the National Olympic Committee, Alexander Zhukov, also recently announced his departure already.

Moetko, a confidant of Putin remains president of the Russian Football, important in preparing for the 2018 event.