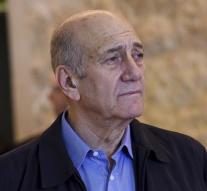 tel aviv - Former Israeli Prime Minister Ehud Olmert (71) was sent to a hospital from prison on Tuesday. Olmert, who faces a two-year sentence for corruption, had complained about chest pain in Israeli media. A spokeswoman from the prison service only wanted to confirm that he had been transported for hospital examination.

On Thursday, a committee must decide on an Olmert request for early release. He had been under pressure lately because the police wanted to question him about new allegations. Olmert works in prison on his memoirs and, with the help of his lawyer, tried to smuggle a highly secret information script without submitting this to the censor.

Due to the corruption scandal, Olmert had to resign in 2008.