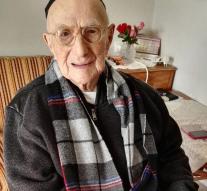 haifa - The oldest man in the world, Yisrael Kristal, who survived the Holocaust, died in Haifa on Friday at the age of 113. The newspaper Haaretz recalled that he celebrated his 'bar mitswah' last year, the ceremony and ratification of religious adulthood. That was a century later than usual for a Jewish boy. He missed that celebration at the time of the First World War.

Kristal was born on the 15th of September 1903 in the Polish city of Zarnow. In 1920 he moved to Lodz, where he would later open a candy factory and set up a family. After the German invasion he was sent to Lodz's ghetto with his wife and two children. Later, deportation followed to the concentration camp Auschwitz. His wife and children came through the Holocaust.

Kristal reigned in 1947 and emigrated to Israel three years later. He almost never spoke about World War II. 'With what happened in Auschwitz one day you could fill two books,' he said in a rare interview with Haaretz a few years ago.