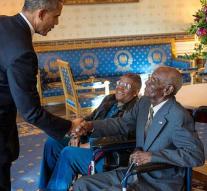 A relative of Overton has informed the CNN channel. According to CNN, he was also the oldest man in the US. Overton had recently been hospitalized with pneumonia.

Overton served during the Second World War for three years in the Pacific region. In interviews Overton said that thanks to God he had become so old, but that he also benefited from drinking whiskey and smoking cigars. He did not inhale the smoke from the cigars.