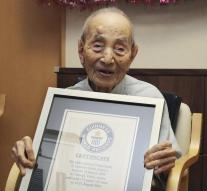 amsterdam - Yasutaro Koide, born on March 13, 1903 and with its 112 years the oldest man in the world, is deceased this morning.


The Japanese, who lives in Nagoya, southwest of Tokyo, died, according to local authorities on the effects of heart failure and pneumonia.
Koide last August was officially recognized as the world's oldest man. His secret, as He revealed at the time: not smoking, not drinking, and 'happy life.'
The oldest living person is currently a woman, the 116-year-old Susannah Mushatt Jones from the United States. Who after the death of Koide's new oldest man, is not yet known.
The oldest Dutch husband, Wim Hendriks from Wanroij, incidentally celebrates its 107th anniversary.
Life expectancy in Japan is amongst the highest in the world. Both men and women are on average older than 80 years. On the Japanese island of Okinawa live the most centenarians in the world.
Incidentally, if it is up to the Brazilian Jose Coelho de Souza, Yasutaro Koide was not the oldest. Jose claims that he is 131 years old- and the oldest person in the world ever. At least, his age is on a birth certificate. Evidence or not, the Brazilian Institute for Social Security draws the authenticity of the document after, even if only from bureaucratic considerations.
NEW