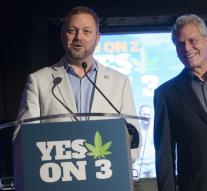 cleveland - Residents of the US state of Ohio shoot the plan to legalize marijuana for people over 21 year. The proposed constitutional amendment, according to US media was little enthusiasm. When counting 72 percent of the vote was around 65 percent against legalization.

Ohio was the first state where marijuana can be both medicinal and recreational use is permitted. The plan was on ten locations in Ohio to give exclusive rights for the cultivation of cannabis plants, and the marijuana would be delivered to pharmacies, retailers and manufacturers. These facilities where the cannabis would grow, are in the hands of investment companies.

Many residents fear therefore a " economic monopoly position " and fear that " individuals earning a lot of money at the expense of many others ". Proponents point is precisely that there can be a billion dollar industry that provides many jobs and tax revenues.

Gov. John Kasich, also the Republican candidate for the presidential elections of 2016, to proudly said that his people had voted 'no'. " In a time when many families are torn apart by drug abuse, Ohioans choose a path that helps to strengthen our families and communities. "

Next year will be voted on in seven other states about the recreational use of marijuana.