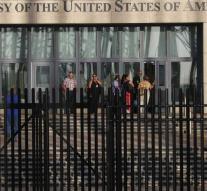 amsterdam - Employees of the American embassy in Cuba may have become victims of attacks with microwave weapons. Because of this they heard loud bangs and other irritating sounds. They are weapons that can make you ill or even cause brain damage.

The diplomatic mission in Havana has been tormented by a very high sick leave since late 2016. The diplomats remarkably suffered the same problems: hearing damage, dizziness, headaches and sleep problems. In June of this year, two more employees had to leave the embassy for this reason.

The New York Times is now concluding on the basis of official reports and interviews with experts that a radiation weapon or weapons may have been involved. These are commercially available on the market for defense products. For example at the Finnish Arctic Photonics.

This variant is known for its effect as the kotskanon. It is used against pirates off the Somali coast. The US also applies the technique itself. For example in Afghanistan. The technique goes back to the fifties. Both the Americans and the Russians experimented with it.

Cuba has always denied having done anything to jeopardize the health of US diplomats. If radiation weapons have indeed been deployed, the question is who is behind it and why.