Home / World / Offer May 'Down Expectation' 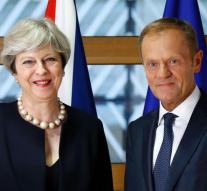 brussels - The 'offer' made by British Prime Minister Theresa May on EU citizens' rights in the UK after the brexit on Thursday is 'below expectations.' The risk is that their position will deteriorate. EU President Donald Tusk said that Friday after the EU summit in Brussels.

Other leaders were certainly not keen on enthusiasm. This is not a breakthrough, said Chancellor Angela Merkel. Belgian Prime Minister Charles Michel finds the plans vague, and Prime Minister Mark Rutte has 'a thousand questions. '

European Commission President Jean-Claude Juncker: 'This first step is not enough yet. 'Representatives of the 3 million EU citizens living in the UK did not have a good word about it.

May suggested that EU citizens living legally in the United Kingdom for five years or more will be granted a residence status after UK departure from the EU. She called it a 'fair' proposal. However, there is still a lot of uncertainty. The British come on Monday with more details.

EU chief negotiator Michel Barnier will then analyze the plan and then come up with a response.