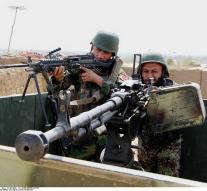 kunduz - Afghan troops fighting in Kunduz in early Tuesday morning with the Taliban. The Taliban withdrew Sunday the Afghan city in, exactly a year after they managed to take the city for a short period. Afghan troops trying to get out of town again.

According to the Afghan police air support is provided to reduce the Taliban. Also reinforcements on the way. ' We have slain more than 25 enemies and we have recaptured several parts of the city. We will purge the city from the Taliban. ''