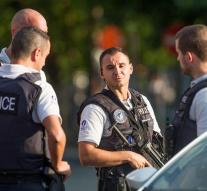 brussels - The man who two policewomen sat in the Walloon city of Charleroi attacked with a machete was a 33-year-old Algerian. He stayed in Belgium since 2012. This was announced by the Belgian public prosecutor Sunday.

The man was known to the police, but not because of terrorism. He hit Saturday with a machete to a police station in Charleroi and cried while,, Allahu Akbar '. Both cops were injured.

The attacker was shot and died.