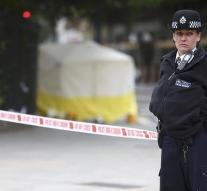 london - The man Wednesday in London stabbed a woman on the street and wounding several people, is a Norwegian national. The woman who died after she was stabbed in her back, was an American.

This was announced by the London police Thursday. The injured are British, American, Australian and Israeli nationality. They are all out of danger.

According to a spokesman the defendant had mental problems. There is no evidence that he was radicalized. 'Right now we believe that this was a spontaneous attack and that the victims were chosen randomly. '