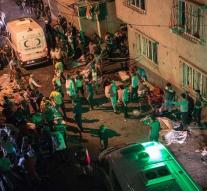 - It is not certain whether the bombing of a wedding in the Turkish Gaziantep is committed by a child. The Turkish authorities return to earlier statements about it. According to Prime Minister Binali Yildirim,, he is not in a position to say whether it is '' to a child or adult.

,, It is not yet possible to identify the perpetrator or the organization behind the bombing. No indications were found during the investigation. ''

Sunday said President Recep Tayyip Erdogan that the perpetrator was a child aged 12 or 14 years, who acted on behalf of IS. In the bombing 54 people were killed. The bomb went off Saturday in the Akdere district when a large group of Kurdish wedding party on the streets further fourth.